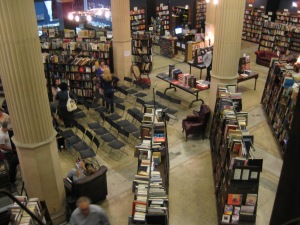 In a former bank? haberdashery?  at the corner of 5th and Spring downtown, some mad genius has created a bibliophilic Wonderland called The Last Bookstore.

Rows of free-standing bookcases march across an expansive floor covered in the original tiny ceramic squares. Redwood-sized columns support a two-story height with a mezzanine level running along three of the walls. CDs and bins of vinyl LPs occupy an alcove that’s the size of many downtown shops.

And then there’s the book-themed artwork. Books and sheet music fly into the air, support the check-out counter, create an arch along one wall.

Have I mentioned the superabundance of comfy chairs and couches? The many readings, panels, events? The open mic every Monday @ 8 p.m.? And finally, as if gilding the lily, ensconced on the mezzanine is a yarn emporium while a coffee bar occupies a corner of the main floor.

Okay, I admit it: I was wrong.

When someone proposed commandeering a chunk of “unused” reservoir property to use as parkland, I was aghast. “It’s not unused space,” I said. “It belongs to the coyotes.”

True enough: Everyone had their stories about seeing coyote kits gamboling in the field or coyotes slipping underneath the fence or coyotes sitting placidly inside the fence watching us watching them.

I liked having fallow, open space unsullied by humans. I worried about increased human-coyote contact if coyote habitat were curtailed. I didn’t relish more traffic and parking hassles. I envisioned pedestrians attempting to cross Silverlake Boulevard and being mowed down by cars.

The community split: You were either “Open the Meadow!” or “Save the Meadow!” The issue became so contentious that a Saturday morning public meeting held on the contested property drew more than 150 people. 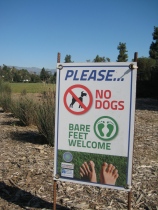 The “open” folks claimed that the park would be a quiet place, “you know, where people come to sit and read poetry” (actual quote). Traffic? No problem: Visitors will come from the neighborhood; they’ll walk, not drive.

Nonresidents told us that if we didn’t open the land, we were being selfish. They said just because you have backyards for your kids to play in ( I don’t), doesn’t mean the rest of us shouldn’t have more space.

The openers won. Existing fence was torn down and  moved closer to the reservoir itself. The walking path was relocated. Non-native plants were excised, trees planted, and sod laid.

After more than a year of work, the Meadow (it now required capitalization) was opened with great fanfare. I did not attend the ceremonies.

I couldn’t boycott the place forever, though. Several weeks following the opening, I walked through the Meadow; young parents with a toddler sat on the grass as their child ran free. Then, I “got it”: A vast expanse of open lawn safely enclosed by a low fence where no dogs were allowed was just what city kids needed.

The Meadow is not problem free. Traffic has increased and parking is at a premium. A strategically-placed crosswalk cuts down on—though does not eliminate—jaywalking, but the crosswalk’s traffic light ruins the view of Richard Neutra’s VDL House.

Even so, I don’t mind being wrong when the outcome is so right.

It’s no mystery what used to be in this empty lot on Rowena: Blackburn Lodge—a down-at-the-heels board & care facility—a couple small cottages, a showroom with ever-changing tenants, and a neighborhood restaurant called The Coffee Table

Food at the Coffee Table was good enough that you’d take out-of-town friends there for weekend brunch and prices were reasonable. (Plus it was one of the first places around to have a vegan entree of scrambled tofu). They also sold The New York Times.

Seating was plentiful:  a smoking section out front, large roofed patio in the back, and, in between, tables surfaced with colorful mosaic tiles.

All sorts of folks turned up at the Coffee Table: moms met other moms for coffee while their kids slept in strollers, community groups gathered  for committee meetings, writers bogarted the tables near the windows, employees from local businesses came in for lunch.

Then, abruptly last year, our Peaceable Kingdom was upended: The landlord gave the Coffee Table  one week to close up shop. Staff who had worked there for years were suddenly unemployed. Everyone was stunned.

We could have seen it coming. Years ago, developers bought the building and land under it intending to build condos. Blackburn Lodge shut its doors, but the other businesses held on while the new owners went through the permitting process. Neighborhood push-back forced the developers to integrate the Coffee Table into the project and to decrease the number of units being built.

Then the Great Recession hit and/or the developers got fed up with city and neighborhood demands, the project stalled and eventually the property was resold. The Coffee Table lived on, using portions of the Blackburn Lodge property for parking.

But, invisible to us, deals were in the works. New owners appeared, shut everything down, razed the buildings, and put up a chain-link fence. Rumor was that condos were in play again. That was at least a year ago.

I believe the property has changed hands again–or maybe I’m thinking of yet another sale during the Great Reprieve. In any case, nothing has been built–not even a building permit posted–and the lot remains empty save for castor plants.

Remember when giving human names to business enterprises was in vogue? There was, for example, Ted (United Airline’s brand that attempted to compete with low-cost regional carriers) and George (the glossy monthly co-founded by JFK Jr.).

The commonality of these efforts, besides the attempt to anthropomorphize decidedly unanthropomorphic entities, was how short-lived they were. Five or six years and they were history.

Except here in Silverlake where we still have a building named roger (yes, small R).

Some things last. The Slinky. Rock ‘n’ roll. Patriarchy. The Koran. Others do not: Nehru jackets, pet rocks, the Pennsylvania Railroad. And male names for businesses. 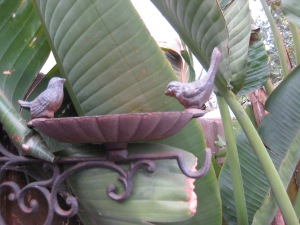 I came across this bundled figure as I finished my walk through Atwater Village Friday morning. He lay at the far end of the parking lot where I had left my car.

The heavy sky had just begun to spit rain. I snapped the photo and walked on, ready to drive home. Then, I paused.

What was my responsibility to this man, out there in the rain? We’re so used to people living their lives in public spaces. “At least I notice,” I congratulate myself now and again for not turning away. Or not believing the homeless want to live as they do. For volunteering at a cold weather shelter. For buying panhandlers food.

All very well, but that still left a man in the rain.

I sighed and fished a five dollar bill out of my wallet. That was more than I usually hand out; I suspect the largesse was as much balm for my distress as for his.

I drove to the spot where the man lay, approached, and, in my well-mannered way, softly said, “Excuse me.”

He didn’t stir. And I didn’t want to wake him; the rain would do that soon enough.

Lying on the ground beside him in a plastic sheet protector was a sign written in pencil: “I am homeless.” I tucked the five inside the plastic and left.

Maybe it was still there when he woke, maybe it wasn’t.

At times like these, I think of the old story about a woman faulted for honoring a noted teacher with an extravagant gift. Better the money be used for the poor, onlookers carp. But the teacher silenced critics, saying, “She did what lay within her power to do.”

Whatever we do on occasions such as these is never enough and often not even the best thing. But: we do what we can, one five dollar bill at a time.

Here’s an example of why I decided to actively look at what’s around me.

Two palm trees conveniently side-by-side got me to notice they were different species.

But palms are tall and at street level, I notice them primarily when their tiny fruits, smushed by passers-by, litter the sidewalk. I rarely see them up close and personal.

I’ve learned that the tree on the right is a fan palm, so named because, well, their leaves look like a giant fan. (I think even I could’ve figured that out.)  This one is probably a Mexican fan palm: Washingtonia robusta.

(Pardon my Latin; I’m not showing off and, anyway, I never remember scientific names of plants. But there are so many varieties of palms that I’m getting dizzy from considering them all. The only way I know how to distinguish one from another is to use the Latin designation.)

If it is a Mexican fan palm, it’s origin is the Sonoran desert. Its cousin, Washingtonia filifera, is a native. I’m guessing this tree is W. robusta only because I read that the preponderance of fan palms in urban Southern California are Mexicans, introduced into L.A. at the time of the 1932 Olympics.

Which leaves open the question of why the native trees weren’t adopted.

Or the question which looms larger for me: Why have I thought for 20 years that these were royal palms?

Because I wasn’t paying attention. Royal palms (genus Roystonea) have fronds like the tree on the left. Couldn’t be more different, eh? These trees have pinnate leaves, meaning leaflets come off of a central stem, usually in pairs. (Pinnate: my vocabulary word of the day. It means ‘feathered’ in, yes, Latin.)

I have no idea if this is an actual royal palm. Turns out there are 55 genus of palm trees (family name: Arecaceae [just can’t get away from this Latin business]), though if I knew how many of them were pinnate we could at least narrow it down a bit.

I wonder how to find out for sure?

The neighbor who had layers of his retaining wall scraped off by an errant driver understandably wished to repair the damage. But in doing so, he painted over the charming graffiti that appeared shortly after the accident.

He also made the mistake of painting the wall charcoal gray, instead of the previous lovely, soft green.

A lesson in impermanence, I suppose.

N.B. The wall has since been painted a luscious milk chocolate brown.

You are currently viewing the archives for February, 2013 at Real in L.A..

Real in L.A.
Blog at WordPress.com.