Two Silverlake construction projects would appear to be moving forward. Mostly the progress is illusionary.

Months ago, workers dug trenches and poured footers at the plot where Glendale Blvd. makes a 90 degree turn and Rowena begins. And then . . . nothing. Dirt, concrete, rebar left as it was. Unconfirmed rumor: The developers are behind on payments. 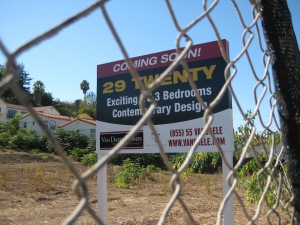 Then there’s the site of the late, lamented Coffee Table on Rowena. Developers put up a large sign announcing “exciting” new construction “coming soon”; that was, oh, maybe six months ago. Other than brush clearing, nothing else has been done.

You are currently viewing the archives for November, 2013 at Real in L.A..