. . . whatever happened to the birds that used to live on the west side of Silverlake reservoir, where Moreno curves east to meet Silverlake Blvd. West? 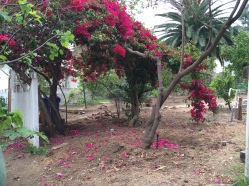 A sizable hen house and fenced yard once occupied the now empty space beneath this bougainvillea arbor. Five or six years ago, it was the first urban chicken ranch I had ever encountered.  A sign announced the property as a registered “backyard wildlife habitat.”

I was so intrigued and spent so much time prowling about on that first visit that a resident (human, not fowl) raced from the adjacent house to inquire about my intentions. Apparently satisfied that my interest was harmless, he gestured towards the luxuriously large te

rraced yard beyond this fence and declared it to be the future home of an organic, urban farm. And vegetables were indeed growing there for the next several years.

I hadn’t passed that way for at least six months, however, and in my absence not only the hens but any trace of their home disappeared. The gardens lie fallow and the habitat sign has been removed.

I miss the chickens; even more I regret the loss of a site that pushed back urban constrictions and brought a bit of country life into the city. Asphalt, glass, and steel make our lives easier, but chickens remind us that we’re earth creatures like them, rooted in soil, air, and sunlight. That’s a service even better than eggs.

You are currently viewing the archives for April, 2014 at Real in L.A..