Two Ladies of a Certain Age were telling a clerk in the museum gift shop how they had been students at Immaculate Heart College when Sister Mary Corita taught there. “Oh yes,” she says, “we hear that a lot.” 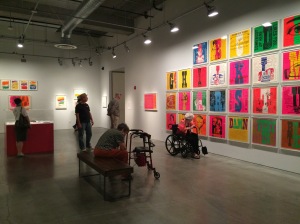 It was the final day of Someday is Now: the Art of Corita Kent, a massive retrospective of the print-maker’s work at the Pasadena Museum of California Art. Scores of visitors moved through the spacious gallery pausing to gaze at the large, colorful silkscreened prints. In one sheltered corner, a biopic of the artist, Primary Colors, played to a rapt, standing-room-only audience.

Like the Ladies, I, too, have a connection with Sister Corita, though more tangential and, perhaps, more complicated: From 1992 to 1995, I taught at Immaculate Heart College Center, the graduate-level successor to Immaculate Heart College, which closed in 1981. As a welcoming gift, I was presented with a framed Corita print and came to learn about the artist’s tenure with the Immaculate Heart of Mary Catholic religious order.

Long before I came to Los Angeles, however, I knew Sister Corita’s art from the covers of Daniel Berrigan’s books, The Trial of the Catonsville Nine  among others, and, of course, the 1985 LOVE stamp she created for the U.S. Postal Service (at 700 million impressions, the most reproduced artwork ever).

Born as Frances Kent in Iowa at the end of WW I, she became Sister Mary Corita in 1936 when she joined the IHMs in Los Angeles. She graduated from Immaculate Heart College and began teaching there in 1947, but did not learn the silk screen process until 1951, as she worked on a master’s degree in art history at the University of Southern California. 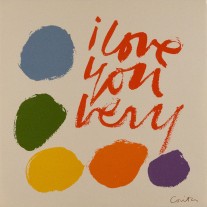 the late 1950s and 1960s and the playful Alphabet and Circus prints from the period after she left religious life in 1968 until her too-early death in 1986.

Only a few of Corita’s early, distinctly religious works were displayed. This included one of her first prints, “The Lord is With Thee,” which surprised her by winning a first prize in printmaking at a 1952 juried LACMA exhibit. Another, based on the New Testament “wedding at Cana” story (John 2:1-11) reflects Corita’s association with a wide swathe of the artistic avant garde: She depicts First Century wedding guests seated in wire side chairs designed by noted mid-century modernists Charles and Ray Eames.

This lacuna left me wondering what kind of art Sister Mary Corita was making before she found serigraphy. And I thought about her in those pre-Vatican II days working in the college art studios in black habit and veil with stiff white wimple. How did she balance the demands of religious life with college teaching, lecturing, and art making? (With difficulty, apparently; her insomnia was legendary.)

Answers to those questions lie in the plethora of books about Corita and her art published this year: Someday is Now, the exhibition catalogue (already out of print); a biography by April Damman, Corita Kent: Art and Soul; and Corita Kent and the Language of Pop, a more scholarly examination that positions Corita within a wider artistic and social context.

This is as good a place as any to clarify that the iconic, Vietnam War era sunflower poster proclaiming, “War is not healthy for children and other living things,” was not the work of Corita Kent but another Los Angeles print maker,  Lorraine Schneider, who was active at the same time.

Both artists, however, donated their work and royalties to nonprofit organizations. Poster-sized reproductions of “War is not healthy . . .  “ can be ordered from Another Mother for Peace. Medallions, stickers, infant t-shirts, bumper stickers and embroidered patches also are available. You can peruse the large catalogue of Corita Kent’s work on the website of the Corita Art Center, maintained by the Immaculate Heart Community.

You are currently viewing the archives for November, 2015 at Real in L.A..