Have you ever seen a violin in a marching band?

Neither had I until Mucca Pazza* emerged from the Angles Flight funicular and marched into California Plaza for their noontime gig at Grand Performances.

Self-described as a “punk circus band,” Mucca Pazza brought 22 musicians wearing bits and pieces of mismatched band uniforms, dorky hats included, from their home town of Chicago where it’s made a name for itself by providing an afterlife for high school and college band geeks.

Heavy on brass and percussion, Mucca Pazza also features saxophones of various pitches, clarinets, electric guitar and mandolin, and an accordion. (Adding to the punk vibe, the latter three plus the violinist wear amplifiers attached to helmets lest their contributions go unnoticed.) 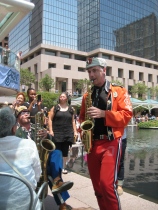 Don’t go to hear Mucca Pazza expecting Sousa. Their jazzy, pulsating rhythms suggest Big Band jazz as might be played by meth heads and are matched to syncopated moves that blend Motown and locked-ward bedlam.

No punk circus band could do without cheerleaders; Mucca Pazza has two: hyperbolic young women with ginormous pompoms who over-compensate for never making the squad in high school.

Photographs don’t do them justice so check out their music video. http://www.grandperformances.org/events/lunch-box-mucca-pazza/ 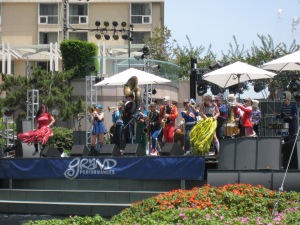 *Wikipedia says that Mucca Pazza “comes from the Italian for ‘crazy cow,’ which is also a name for the Creutzfeldt-Jacob disease.” Sounds entirely plausible.

You are currently reading Band geeks find love at Real in L.A..