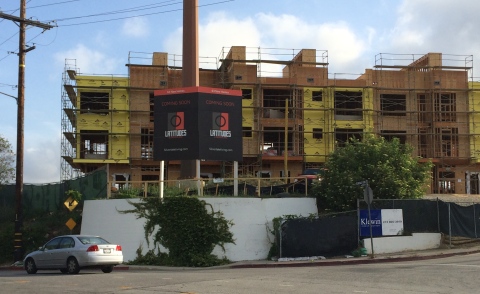 Silverlake living is yours in the height of contemporary tri-level townhomes with a rare sophistication in luxury and style. Lavishly appointed residences offer 2, 3 and 4 bedrooms, offices, stunning roof top terraces and square footage ranging from approximately 1,243 to 1,910. You are minutes from downtown and everything that is happening. Follow life’s directions to a new experience . . .

A writer got paid for coming up with this bit of promotional fluff, which, as a member of the National Writers Union, ought to make me happy. To the contrary, my teeth hurt reading such drivel, particularly as it describes a condo development in my neighborhood.

Nebulous, and a more potent signifier for being so, “Silverlake living” hints at more than just “residing in the neighborhood of Silverlake.” “Silverlake living” is now a commodity, a desirable thing that can be bought and sold. “Silverlake” used this way is not a place on Earth, a neighborhood with tangible houses, streets, trees, coyotes, and people but an adjective modifying “living.”

Lacking explicit meaning, “Silverlake living” becomes a repository for whatever potential residents might desire: a residence close to the Meadow and Griffith Park; good schools; relative safety; high resale value because of all the foregoing. Regardless of what ownership might in reality entail, and the high tension lines running across the property are nowhere mentioned, this fill-in-the-blanks ad-speak offers everything and nothing.

More than mere habitation, these condos, the developers suggest, will endow their owners with a certain cachet, a social significance that bestows identity on residents—-but will their lives as actually-lived define what “Silverlake living” consists of?

According to the copywriter, residents will acquire sophistication and style, along with a lavish and luxurious home. They will be close to downtown—which could mean Disney Hall, Bunker Hill offices, or clubs like The Edison, but not, presumably Skid Row—and “everything that is happening,” a promise of cosmic proportions.

I don’t imagine that the “life directions” we’re urged to follow are our moral compass, or urgings of conscience, social concern, or revolutionary zeal, but the lemming flow of perceived hipness and nonconformist conformity. This “new experience,” the website intimates, will elevate us above the hoi polloi, or, failing that, at least be new, the true marker for American exceptionalism.

And what have the site’s developers christened their project? The perfect ad-speak appellation: Latitudes, a word suggesting “scope for freedom of action or thought.” The designation insinuates that wherever you live now, you are constrained, prevented from reaching  heights you know you deserve to inhabit. Move to Latitudes and an expansive life awaits you.

Back in the day, only religions offered these kinds of pie-in-the-sky inducements. Tri-level townhomes, it appears, are the new Paradise.

Unclear if pearly gates are part of the package.

You are currently reading A new heaven; same old earth at Real in L.A..