A Song for the Genius Child 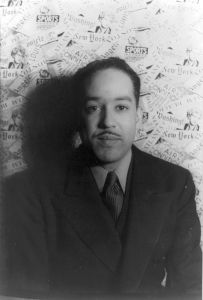 excerpts from Langston Hughes’ Ask Your Mama: 12 Moods for Jazz, I made reservations immediately.

A lengthy and dense work, Ask your Mama is a scream of a poem—Hughes wrote the entire piece with the caps lock on—a phantasmagorical journey through centuries of injustice, brutality, suffering. Sadly, it never received the full multi-media treatment envisioned by Hughes before he died in 1967.

Then, late in the ‘00s, composer Laura Karpman, in collaboration with soprano Jessye Norman and neo-soul/rap group The Roots, created a fully orchestrated production that premiered at Carnegie Hall and later played to sell-out crowds at the Hollywood Bowl and Apollo Theatre in Harlem.

Earlier this month, Avie Records released a studio recording of “Ask Your Mama” featuring soprano Janai Brugger. She joined the composer on stage at the Central Library to reprise sections of the work.

Victoria Kirsch accompanied on piano along with bassist David Young; Taura Stinson provided additional vocals as Karpman led the capacity audience on a tour through her production.

I harbor more than a casual interest in Langston Hughes.

Picture the place: an insular small town built of red brick and prejudice

Hughes came into my life through the grace of older siblings and the nonchalance of liberal parents who encouraged me to read anything, as long as it wasn’t Nancy Drew. In him I found a companion in outsiderness, an otherness that bound us together and, paradoxically, kept us apart. For both, I remain deeply grateful.

With warp and weft of words, Hughes wove magic carpets that didn’t take me away from  the pain of not-belonging but into its belly, transforming distress into art.

This is a song for the genius child.

Sing it softly for the song is wild.

Sing it softly as ever you can—

Lest the song get out of hand.

Abandoned as a child, first by his father and then his mother, Hughes wrote lines that pulsed with loneliness, yet also with hope. He stood in the mire “seeking the stars,” as one of his poems attests. His life and literature abounded with dreams deferred and opportunities seized.

At 19 he left college from the strain of Ivy League racial prejudice. As a 23-year-old bus boy, he shyly, and slyly, slipped his poems to a noted littérateur in a hotel dining room and got his photograph in newspapers across America.

Nobody loves a genius child

Can you love an eagle,/ Tame or wild?/ Wild or tame,

Can you love a monster / Of frightening name?

I alway knew I was an eavesdropper, an interloper, listening to Hughes across the chasm of America’s racial divide. Harlem rent parties, Parisian jazz bands, dark virgins and red stockings, daybreak in Alabama: This was not my world. I might imagine myself a kindred spirit, but the reality of being “Negro” in America was as far from me as the surface of the moon. Through Hughes, I learned about that reality: the lives of domestics and elevator “boys,” sharecroppers and urban party-goers. He introduced me to the Harlem Renaissance, Crispus Attucks, be-bop, lynching, and Jim Crow laws. He pulled back the curtain on a different world and I marveled, albeit from afar.

Nobody loves a genius child.

Hughes plowed literary ground for me so that, when the time came, I could hear James Baldwin and Richard Wright and, too many years later, Zora Neale Hurston, his one-time friend and collaborator. Because of his conscientious words and phrasing, I would read, admire, and even dare to teach Toni Morrison, Alice Walker, Paule Marshall, bell hooks, Audre Lorde.

It all goes back to the Hughes, who addressed the alienation of a 14-year-old white girl, separated by race, a half-century in age, and a literary era long since passed. My affection for Langston Hughes was improbable—and yet, there it was and has remained.

You are currently reading A Song for the Genius Child at Real in L.A..