The first Black president makes his final State of the Union address, and it’s spunky. He vigorously bats down Republican-peddled untruths about the economy, Muslims, national security, and foreign policy. He expresses regret at his inability to defuse the inter-party rancor that’s led to a Congressional logjam. He tells us to take care that our future workforce is well-educated and ready for technological challenges.

And how did our Newspaper of Record, the Los Angeles Times, report the President’s words? With a three-inch headline announcing that a professional football team will take up residence in Los Angeles. A story about the president’s address, meanwhile, was way down the page, below the fold. 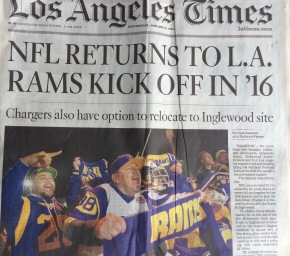 Granted, the SOTU story carried inside to a two-page spread–news reporting accompanied by an analytical piece—but with more than half the space taken up by photos.

The football franchise, in contrast, got two front page stories occupying two-thirds of that page. These continued inside with more column inches of text than the POTUS received.

Why do I even bother with the outrage?

The LA Times has been flailing about for years and not just because of massive changes in the media world. The decision by third and fourth-generation scions of the Otis-Chandler family, which had controlled the newspaper for 125 years, to sell off the business in a highly leveraged deal sent the paper into bankruptcy. Lay-offs, buy-outs, and other cost-cutting has resulted in far less actual news, fewer features, and enormous headlines and photographs to make up the deficit.

One of the photos placed with the football story exemplifies these dispiriting tendencies. Men decked out in team jackets, jerseys, and hats displaying a team flag, banner and even an enormous cut-out of the new team owner’s disembodied head were identified in the accompanying caption as “jubilant Rams fans.” Maybe some of the guys were locals excited about NFL’s return to L.A. but please don’t tell me they’ve been keeping all that gear in the closet for 20 years, waiting for the Rams to return. It was a pep rally equipped by team marketing managers, a non-event created for the media, which the Times reported as news.

You are currently reading Rams 1, POTUS 0 at Real in L.A..